Preview: Lucky Plush’s The Better Half 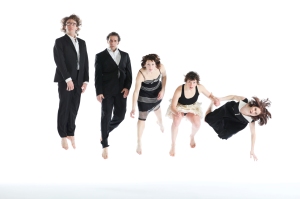 The cast of "The Better Half". Photo by Cheryl Mann.

Tonight at the MCA Stage, Lucky Plush Productions (LPP) opens a two weekend run of its new production The Better Half.  A 75-minute collaboration between LLP Artistic Director Julia Rhoads and physical theater troupe 500 Clown Co-Founder Leslie Buxbaum Danzig, this new work puts a modern, interactive twist on the psychological thriller Gaslight (1944 movie based on the Patrick Hamilton play Angel Street) where a husband tries to make his wife believe she’s losing her mind.  The Better Half incorporates characters, text, lighting (Heather Gilbert) and sound (Mikhail Fiksel) cues and a heave dose of reality to keep the story evolving in real time on stage.  Add in costumes by Jeff Hancock and you have the setting for a fun, creative collaboration living inside a live, artistic whodunit?

I spoke with Rhoads earlier this week about her process and the new work.

I’m embarrassed to say, I think the last thing I saw Lucky Plush perform was Lulu Sleeps (2005). (*Side note:  After viewing the repertoire on LPP’s website, I’m happy to say I have seen most of the recent work, although I did miss last year’s hit Punk Yankees.)    Back then, you were incorporating theatrical elements, but recently you seem to be adding even more theatrics and humor.  Is that a different direction you’ve taken over the years, or is it just because I’ve missed some of your work?

I think it’s both.  One of our first works has been our longest standing work which we’ve done over and over is Endplay (2003).  That work has a (Samuel) Beckett play inside of it and is very much about human relationships and about the performers on stage and how they’re interacting and negotiating with each other.  I think that piece had a real liveliness to it that I’m interested in now in my work.  One thing that was a big game-changer for me was Cinderbox 18 (2007).  It just was kind of a magical process.  That was a process in which I started to think more about the liveness, the immediacy of being in performance and having the performers be in a state of response to each other, so it’s less like every move and detail is set and choreographed…there was a real openness.  I did this thing back then where I’d write a little note down for each of them some unknown element that they had to accomplish during the run.  Some of them ended up being in the show in a fantastic way and some of them miserably failed, but the best thing is it wasn’t really meant to find new things to add to the show, it was just a bonus if something really landed.  What it did was put the performers in a constant state of presence because they had no idea what the changes were going to be and what someone might do to change the game.  Even though the sections and the structure and the movement was set, there were things that would happen that they would have to deal with and respond in a very real-time way.  It was just such an exciting process for me.  Since 2007, and really going back to Endplay, I really want the audience to feel like they are knowing the performer, that it was really about the people and not just the dancers being sort of a non-subjective entity.

This process in The Better Half is even going more in that direction.  Accessibility is really important.  I think it’s sometimes perceived as a dirty word.  I think accessibility is great.  You can be incredibly intelligent and accessible.  It doesn’t mean you’re diluting the content, it just means you’re allowing the audience to enter into it and to maybe laugh or maybe feel like they’re included.  This process has moved more into the dialogue…it’s more narrative.  The dialogue is in service to character development. Narrative, at the same time, we’re doing something very familiar to LPP’s body of work.  We’re also the performers that arrive at the MCA when we start.  We all show up and we get a name of a character.  We get character descriptions.  We hear this vague synopsis of a play.  My character, Mrs. Manningham hears that another person is called Mr. Manningham, so really all we know is presumably, we’re married, so we start to negotiate having a relationship in real time.  Things start to happen.  There’s kind of a loop structure, like reset button, but each time, the consequences change…grows more into the Gaslight story.  The way we hope the work is going to land is kind of fun look at contemporary domestic relationships.  It’s about the five of us being in the space together and negotiating roles that we’ve taken on or that have been imposed on us…how we grow into them.  The loop structure is about routinization that happens in relationships, sometimes how we bring our habits and our role to a relationship and then it’s like that forever.  You can recast yourself in a relationship, but it’s going to take a lot of work.  The piece wants to speak to all of those things, how you want to jump script sometimes and how you find the resilience within a marriage or a domestic relationship.  It’s fun and it’s funny and it has all of those elements, but it also lands with a real resonance about the question of can two people spend their lives together?

When the characters are getting the descriptions, is someone on stage telling them? How is that interacting happening?

In the beginning we’re sort of being directed by light.  Light plays a really important role, light and sound, and we’re directed to a place on stage and one of the characters is directed to a place in the audience where there’s a podium with a binder that has the Gaslight synopsis.  He’s privy to information that he’s one of us too.  It says there’s another character and he gives himself the role of detective.  He comes into the story and is in it for the remaining…being with us on stage as new narratives are proposed.  There are about five or six scripts that we’re sort of navigating through.  There are real time consequences for introducing those scripts and being inside of them and how it ultimately lands back in this central marriage.

How did the collaboration with Leslie come about?  Have you worked together before?

We’ve known each other for a while.  The thing that really drew us to each other is that she’s also interested in the immediacy of presence with the audience and having a real time experience.  She’s also interested in humor.  We’re a really good fit for each other.  She came in during Cinderbox 18.  I asked her to come in to give feedback to the process.  I liked her language and I was really excited by her point of view.  She had seen my work and I think she felt the same way.  She’s really drawn to physicality.  Her work is physical theater and she’s really drawn to dance and physical vocabulary as a way to move a story forward.  We started talking about doing something together a couple of years ago. We’re both really excited about this work.